First of all, EVERYONE GETS INJURED AT SOME POINT. I’m not special. But when I was on the couch this summer wishing I was competing, I drew a lot of hope reading about others’ experiences coming back from injury. I hope that someone else can read this and know that while injury undoubtedly sucks, it’s not the end. You will TAKE A BREAK. Keep breathing. Cross train. Work. Try to have some fun. Challenge yourself in new ways. And eventually, you will run again.

In 14 years of running, I had never been injured. Did I deal with pain? Absolutely. Most days, running is not perfect. There’s always SOMETHING that’s sore, tight, pulling, stiff. I prided myself in being able to run through pain and yet take care of myself. My coaches had always drilled that there’s a difference between something hurting and being hurt. I still totally agree with this, as part of being a runner is handling your body and being tough, but last year I took it too far. I wasn’t hurting, I was hurt.

January: Foot starts hurting. Run on it for two weeks, gets a lot worse and moves into my shin. I finally tell AC and we decide I shouldn’t do the track workout coming up the next day.

January/February: Random days off, trying a million different things to get my shin feeling better. Taping myself together and pretending that ice and ibuprofen are the gods of healing. Run a PR in the Mile and 5k, head set on crushing the upcoming 15k.

March: Withdraw from the 15k. Take a few weeks off, get started again when I think my leg is getting better.

April: Limp through a horrific 5k at Mt. Sac. Decide I definitely need to take time off until my leg is better.

April, days later: Encouraged that I can just run on the Alter G until my leg heals up. Jump at the chance to keep training, eyes ahead on the 25k Champs. 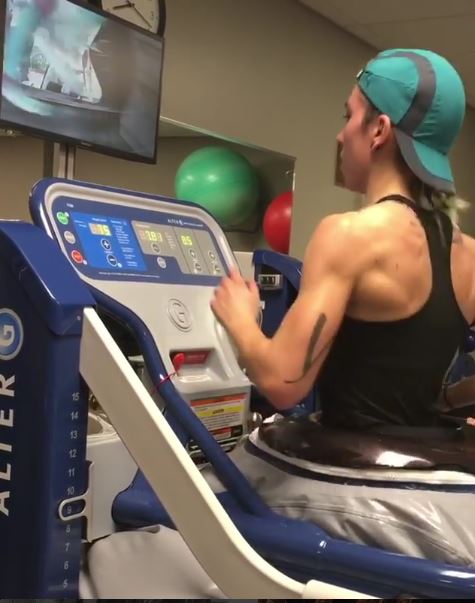 Training on the Alter G.

May: Run 25k, one of the most painful races of my life. Call to Coach AC:

Me: Well, it wasn’t great. But I have to start somewhere.

AC: Is this a start to a season or an end?

Me: *pissed off* hang up, determined to prove him wrong. Stand up, realize I can hardly walk, much less cool down, even less continue training/racing.

Finally shell out the money for an MRI, definite stress fracture. Equal amounts anger and relief.

June-July: Took a real and much needed break. Biked a lot, sweated a lot, watched a lot of bad movies. Challenged myself to max out on push-ups (136) and pull-ups (19). Looking back, I don’t know how I ran on an injury that long. There were runs that I stopped running and started crying, but I was convinced I could get my leg to heal and keep competing. I wanted to be healthy so badly (and was in total denial that I had my first real injury) that I ended up making things way worse than they needed to be.

July: First non-running related trip with Daryl. Like, EVER. We went to Duluth for a few days, hiked, ate good food, drank good lattes, and enjoyed doing whatever the hell we wanted. This is my favorite memory from being injured. 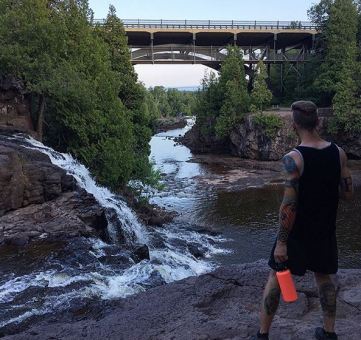 August: Start of training, which began with 10x1min jog, 1min walk. I spent WEEKS of walk/jogging, which I at first thought was ridiculous (I’m in shape, duh) but I quickly learned that running is HARD and even though I was cross-training daily, my body needed a gradual return to running.

Turns out running yourself into the ground isn’t the most effective way to get back into racing. Eventually, I realized (more like AC pounded into my head) that I needed to adjust my goals. I was setting my sights too high and always comparing myself to my peak fitness. I wanted to be where I wasn’t, but I had no way to get there.

After a terrible race at Club XC, I sat in a bathtub for three hours and stared at the wall. It wasn’t just one bad race; it was a year of feeling like garbage crushing the life out of me. I cried. I called my mom. I talked to Andrew, who is one of the best encouragers in times like these because he knows from personal experience that nothing really makes you feel better about a bad race. He knew that I wasn’t in a spot to feel any better, but we were able to have a good conversation about how to move forward. One thing I remember very clearly was him telling me that if I kept doing the same thing I would NEVER get myself out of this. From then on, I was determined to accept where I was at, train at my current race fitness, and make a REACHABLE goal. This was really hard for me, but I’m convinced that mindset change and willingness to adjust helped me dig my way out of a very dark hole. I sat in silence for another 30min, bought myself a giant beer, a bag of chips and salsa, and hit RESET.

My next race was Houston Half. My original dreams of my first half marathon were of running much faster than I did, achieving the Olympic Qualifying Standard, shocking the world, etc., but that day I felt better than I had in a whole year. 1:14:09 was not outwardly impressive in a race that was won in 1:06:39 and included American Record Holder (1:07:25), Molly Huddle (freaking AMAZING), but 20th place and feeling strong that day was a victory for me.

I like to think that injury DID teach me to have a better life balance (even though at the time I was an emotional wreck), and I know that there are other things in my life that bring me fulfillment besides just running. I’m still not satisfied with where I’m at, but I’m stacking healthy weeks that have turned into healthy months and trusting that eventually the work will show itself in a race. This has been a positive start to 2018, and my goal is to keep looking forward.

[Read my 2018 Race Recaps HERE if you want to check out how things are going!]

View all posts by maddiemcclellan